Where am I? Home / Artists / Squiggles 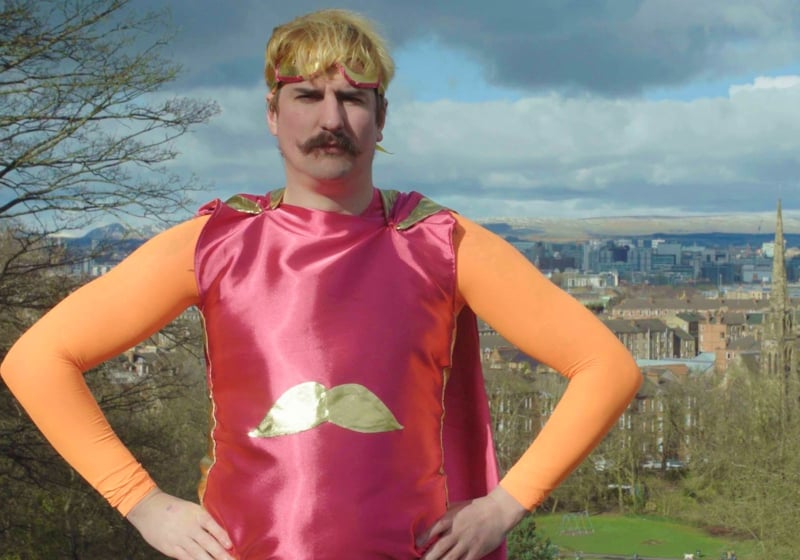 Forget the Avengers. The only superhero we’re interested in is the orange and pink spandex-clad crime fighter in the video for Bend Becomes Break, the first single from Squiggles, the new project from The Spook School’s Niall McCamley.

McCamley explains that Squiggles comes from a dark place – that he’d been struggling with mental health issues, but the death of Frightened Rabbit’s Scott Hutchison gave him a renewed focus.

“Scott Hutchison sped up the process of Squiggles,” says McCamley. “The Spook School were meant to play Frightened Rabbit’s inaugural Glasgow festival The First Incident. Squiggles was something I had been threatening to do for a long time but never really committed. If there is some small piece of hope and love I can take from Scott is that I’m not alone. If there’s any way I make other people feel less alone and more hopeful I want to give myself to that cause with everything I have. This project of a mental health cult called Squiggles is meant to be fun, it’s meant to be silly, and it’s meant to b Se sad.”

We've been treated to some incredible DJ sets at K

Dusk falls, and we pause to soak up some poetry wi

Remember when you used to lose all your inhibition

Seat goals ✨🌳 Remember this? Hanging out on

Things we wish we were doing and can't wait to do

The votes are all in and let us tell you, it was a

So here they are, the big reveal! Thank you to eve

📢 3 days left to take part in Colour Me Kelburn

We've been treated to some incredible DJ sets at Kelburn over the years. From Mr. Scruff to Jenna G, Goldie to Aba Shanti-I and Optimo (Espacio) to ACID ARAB, to name a tiny few. Who's been your favourite? #kelburnparties #wewilldanceagain ... See MoreSee Less

Dusk falls, and we pause to soak up some poetry with Iona Lee poetry at The Pyramid Stage 💚Get reacquainted with Scotland's artists at this summer's The Kelburn Garden Party 2021. Sign up to our newsletter for updates: bit.ly/3tD2x6f ... See MoreSee Less

Remember when you used to lose all your inhibitions in a crowd and just dance? Those truly were special moments, and we're resurrecting them as soon as we can at The Kelburn Garden Party 2021 - hopefully you're all practicing at home in the meantime! ... See MoreSee Less

Take a moment to enjoy a few scenes from Kelburn's past in these winter days. We've done it before and we'll do it again. Stay safe and stay strong. Big Love from us to you <3 Edit by ReCompose.Music: Makoma by ONIPA. ... See MoreSee Less

Things we wish we were doing and can't wait to do again this summer no. 18799837419...Jiving with The BarrowBand at The Pyramid Stage singing about friendship, fun and other vegetables 🥕🥦We're welcoming families back to The Kelburn Garden Party 2021 this summer. Subscribe to our newsletter for updates 👉 bit.ly/3tD2x6f ... See MoreSee Less