Where am I? Home / Artists / Swim School 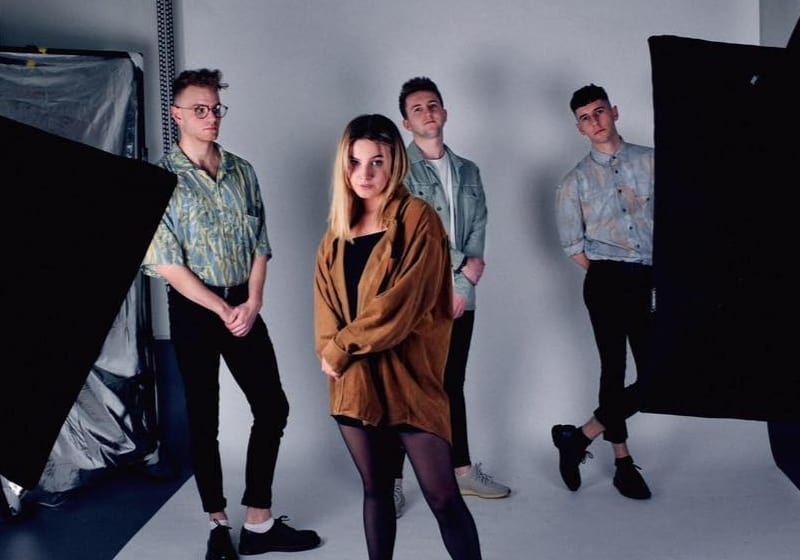 Based in Edinburgh, swim school are a 4 piece, indie-pop band made up of Alice Johnson (Vocals/Guitar), Lewis Bunting (Guitar), Nairn Milne (Drums) and Matt Mitchell (Bass).

Announced in 2019, but having originally formed at the end of 2018, swim school already host an eclectic collection of songs featuring the inspired tones of The Cure, Wolf Alice and The Night Café.

It has been a momentous start for the indie-pop rockers who have been hailed as “ones to watch” for 2020 having already played some of Scotland’s biggest music festivals such as TRNSMT, Belladrum, XPO North and King Tuts Summer Nights alongside a trio of sold out shows with Indigo Velvet, Dancing on Tables and Scottish pop-rock giants The XCERTS.

We've been treated to some incredible DJ sets at K

Dusk falls, and we pause to soak up some poetry wi

Remember when you used to lose all your inhibition

Seat goals ✨🌳 Remember this? Hanging out on

Things we wish we were doing and can't wait to do

The votes are all in and let us tell you, it was a

So here they are, the big reveal! Thank you to eve

📢 3 days left to take part in Colour Me Kelburn

We've been treated to some incredible DJ sets at Kelburn over the years. From Mr. Scruff to Jenna G, Goldie to Aba Shanti-I and Optimo (Espacio) to ACID ARAB, to name a tiny few. Who's been your favourite? #kelburnparties #wewilldanceagain ... See MoreSee Less

Dusk falls, and we pause to soak up some poetry with Iona Lee poetry at The Pyramid Stage 💚Get reacquainted with Scotland's artists at this summer's The Kelburn Garden Party 2021. Sign up to our newsletter for updates: bit.ly/3tD2x6f ... See MoreSee Less

Remember when you used to lose all your inhibitions in a crowd and just dance? Those truly were special moments, and we're resurrecting them as soon as we can at The Kelburn Garden Party 2021 - hopefully you're all practicing at home in the meantime! ... See MoreSee Less

Take a moment to enjoy a few scenes from Kelburn's past in these winter days. We've done it before and we'll do it again. Stay safe and stay strong. Big Love from us to you <3 Edit by ReCompose.Music: Makoma by ONIPA. ... See MoreSee Less

Things we wish we were doing and can't wait to do again this summer no. 18799837419...Jiving with The BarrowBand at The Pyramid Stage singing about friendship, fun and other vegetables 🥕🥦We're welcoming families back to The Kelburn Garden Party 2021 this summer. Subscribe to our newsletter for updates 👉 bit.ly/3tD2x6f ... See MoreSee Less