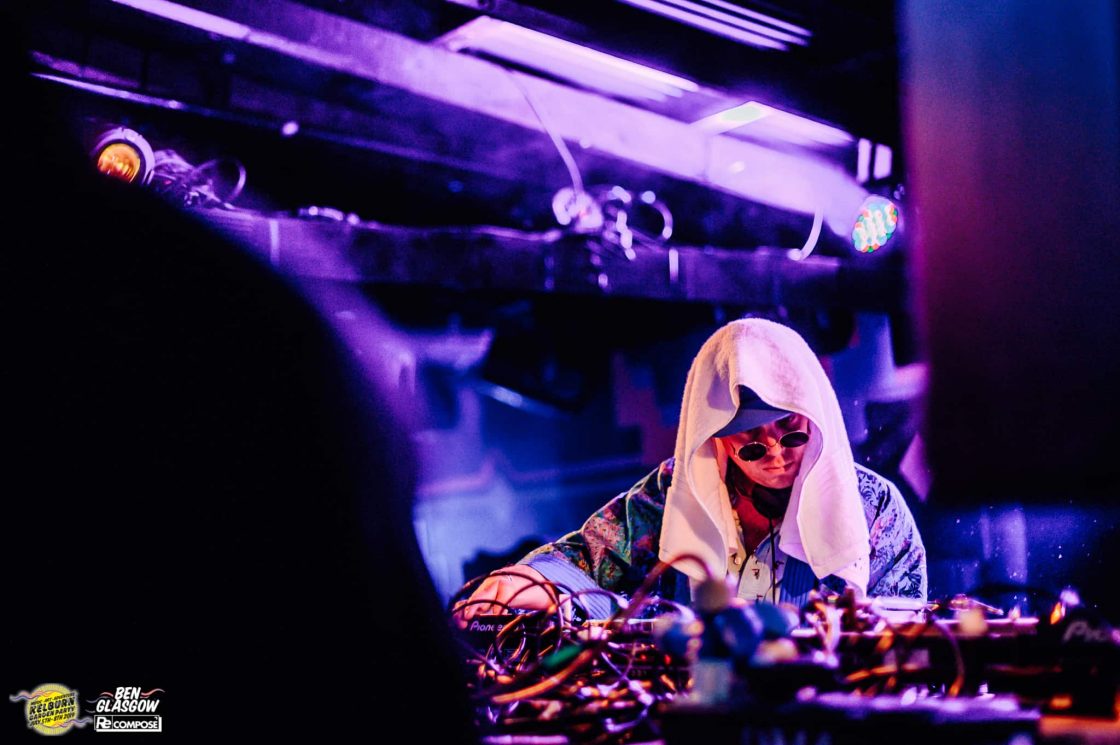 For our next instalment of the Kelburn Garden Party 2022 mix series, we catch up with Paradise Palms Records label boss and hydrotherapy connoisseur, Jacuzzi General. We spoke to him about Palms’ newest compilation Bonnie Tropical, playing gigs after lockdown, and the importance of bubble baths.

Kelburn Garden Party: Hi Jacuzzi General! Could you introduce the mix to us in a few words?

Jacuzzi General: It will be a cosmic delight, which will take the listener through lucid audio landscapes, and hopefully raise them above the parameters of humanity as they know it. Hopefully it will get people ready for what’s going to be the best Kelburn that’s ever happened. It will set the tone for what everyone’s been waiting for, which is returning to the wild for a few days.

Kelburn Garden Party: Your most recent release came out right before the pandemic, in February 2020. Do you think that lockdown affected how people interpreted your music?

Jacuzzi General: It was a release that was primed for dance floors, so I think it must have been difficult to to receive it. I was in Sydney when it came out, and that was literally just the break of the pandemic. People were scared about dancing and going out. It was quite bad timing. But I hope they still had baths to it, and then people got into the more hydrotherapy side of the record. The idea of looking after yourself in a bubble bath.

Kelburn Garden Party: Pleasure and luxury are central themes in your music. How do you go about communicating that in the stuff you make?

Jacuzzi General: I think that melody is the true essence of pleasure. I’m an absolute melody junkie. If you get a beautiful, soaring melody line that won’t leave you, it just takes you to a higher plane, then that for me is the purest pleasure that you can give. That’s how that would translate in my work.

And the image is very important. It’s promoting self care. It doesn’t matter where you are, or who you are, who your alter ego suggests you are. You should be able to treat yourself and look after yourself, be that physically or mentally. Getting into the mindset of self-care through hydrotherapy, or any kind of therapy is important. That’s the image of pleasure for me.

Kelburn Garden Party: What are you listening to when you make your own music?

Jacuzzi General: I like to listen to lots of different types of music. Sometimes I take samples and inspiration from different rhythmic techniques and sounds of drums and interesting guitar lines. They might not survive the end of the song, but they start the process for me. A track that I like at the moment is a Brazilian song called [Neil Avianca] by [trio Makoto]. It’s just fantastic. It’s kind of traditional 1980s Brazilian funk.

Kelburn Garden Party: You’re also label boss at Paradise Palms Records in Edinburgh. How has the label evolved since it first started?

Jacuzzi General: We’re six years in now to Paradise Palms Records. It acts as a platform for new breaking electronica in Scotland. We’ve had the privilege and honour of working with an incredible selection of artists throughout the world, and championing some great local talent too, which has flourished. It’s been great to work with and meet with loads of musicians and encourage them on their journey, whatever step they’re on.

This time around, on the new Bonnie Tropical compilation, it’s electronica in a very broad sense, with a few acts from Aberdeen, predominantly from Edinburgh and Glasgow and acts that we’re going to be working with going forward as well. It’s received an incredible amount of support on the radio, and just generally people seem to be into the fact that we’re still doing these compilations. It’s been a good six years of incredible electronic music.

It’s fearless. It doesn’t necessarily have any boundaries musically, be that in any of our cities or the country. It’s live again, and there’s an attitude and there’s a hunger. When you see new musicians, you can see in their eyes. They’re ready. Everyone’s been primed to come out. I definitely think this is going to be a really exciting year for a lot of labels and a lot of artists that chose not to release. People are playing live for the first time in Scotland. Yeah, it’s really exciting.

Kelburn Garden Party: How has it been for you since everything started opening up again?

Jacuzzi General: I’ve started playing for Soulsville in Edinburgh’s Bongo Club again with the lovely Cam Mason. It’s been fantastic to don my towel again, to get my robe ready, baptising people with a small handheld hoover. People get into it. It’s lovely to be out and amongst the people again. I started a cowboy themed night at Paradise Palms as well, which was just incredible. It’s the best cowboy night, I would say, in town.

This is the 14th part of our Kelburn Garden Party mix series, which features acts who have played at Kelburns gone by – with some due to appear at the festival this summer! Listen to the rest of our Kelburn Mixtape series here on Mixcloud.

Book tickets to The Kelburn Garden Party 2022 on Ticketline.