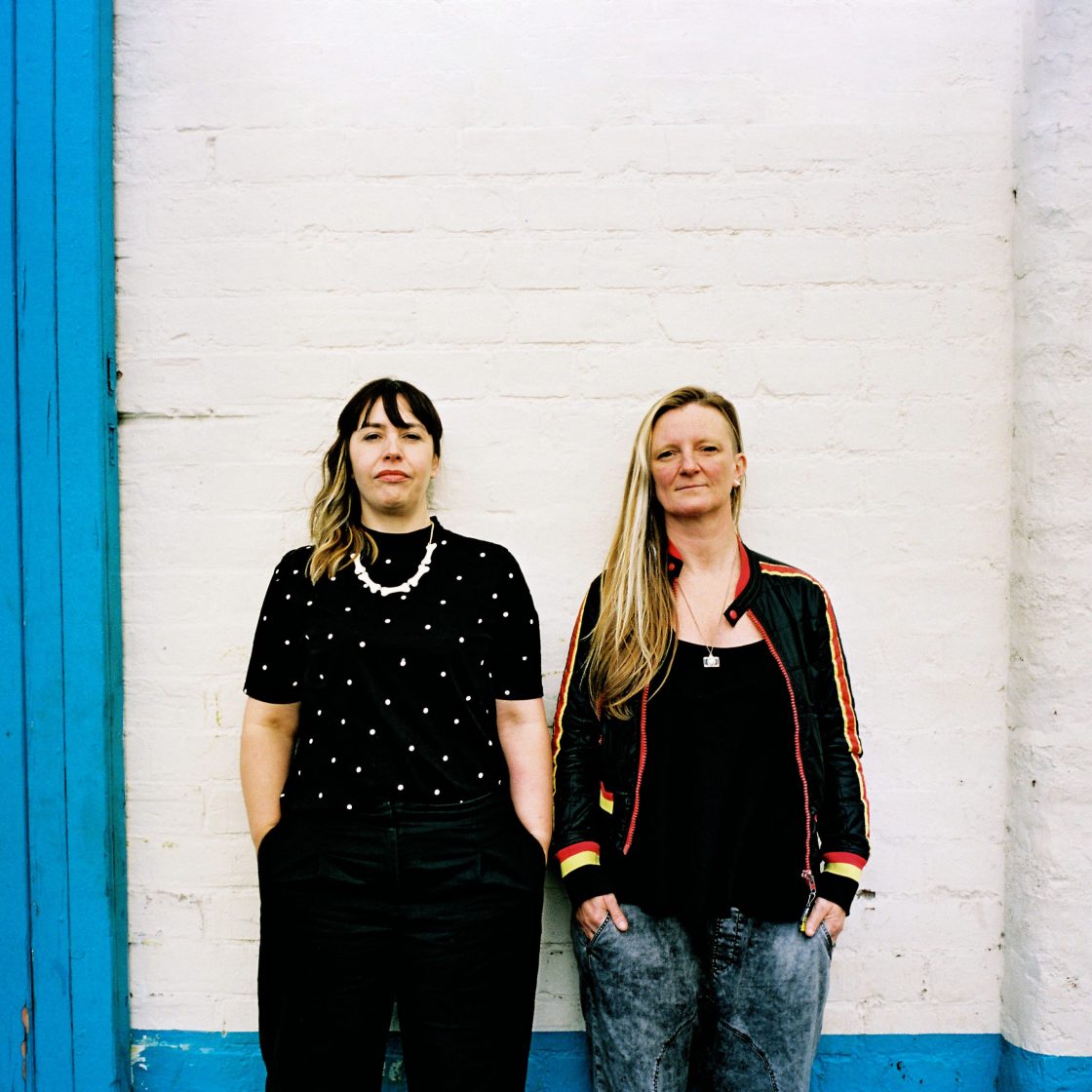 If anyone’s bringing the vibes to the dance, it’s She-Bang Rave Unit. Fronted by Vicki and Kirstie, this collective of DJs first formed in 2010, and they’ve been lighting up dance floors with classic Detroit and Chicago classics, acid melters and bouncy techno ever since. You might recognise them from our Old School Acid House Rave up the Beech Plateau! We caught up with the crew about the early days of Pure, school discos and never giving up the rave. You can listen to their guest mix for our mixtape series here, and read about some of their Kelburn highlights below…

Kelburn Garden Party: Hi She-Bang Rave Unit! Can you begin by introducing your mix to us?

Kirstie: We’ve played at Kelburn a lot, and most often we have been part of the Saturday night Acid Rave up at the Beech Plateau. That is literally our favourite place to play. I’m planning on playing some of the tracks that were played this year, because we had a great time. Everybody was right into it, so why not recreate that a little bit?

Vicki: Yeah, stick to our Kelburn suite and get out the bangers. Acid. Quite a lot electronic. I’m a big fan of some dirty vocal. It’s all in there with a twist of humour always, and really bouncy.

How did you all first start performing together?

Vicki: I remembered Kirstie from Pure and those days. That’s when we met, at a few after parties and things like that. Later, I was about four months pregnant with my middle child and I remember thinking, we all have husbands and partners that are DJs, and we’ve spent years sitting and listening to them playing. We wanted our own opportunity to play our own stuff. It was just an idea to keep myself relevant while I was up the duff, but it turned into something a bit more than that.

Kirstie: You’d got Tracy, who’s one half of NikNak, and Tracy suggested getting me along as well. I was already DJing around the place. It was good, because I’d just had my first baby. I was feeling really mumsy. I don’t know what was wrong with me. My head was like, I can’t do any of the sound stuff any more. I’m so glad that you did that Vicki, because it kind of saved me. It brought me back to the normal me that I already was.

Vicki: We make jokes about the chat we have behind the decks. I remember going with my laptop and rubbing breast milk off my keyboard. Yummy. Rock n’ roll.

It is rock n’ roll! How did those nights at Pure shape your relationship with music in the early days?

Vicki: I like all types of music, but I always return to dance music and techno in its purest form. Detroit. Chicago. It was such an amazing subculture. The atmosphere and the people and the time and the place was perfect. We were very fortunate to be part of that and I think that always ran through our music – the acid of and the banging quality of the techno.

Kirstie: Also just that need to dance, you know? I feel really privileged to have hit my late teens in the 90s, which was old enough to go out to clubs. Maybe not quite enough legally, but old enough to be part of that scene, and not just the club side of it but the underground free party side of it as well. Going to strange venues – forests, warehouses, fields. So the music we play, it’s always to dance to. That’s why we play bangers, because we like dancing to them.

How would you describe each of your sounds within the collective?

Kirstie: We definitely meet in the middle with acid house and all the house classics, with Chicago and Detroit.

Vicki: You go quite fancy and house-y, and then I quite like electronic-y stuff, remixes and vocals. I’ve always been a huge Andy Weatherall fan. I’d go out to Carcassonne on my yearly pilgrimage to the Andy Weatherall Festival [now Convenanza Festival]. And then I’m quite influenced by a lot of that acid-y chug sort of stuff.

Kirstie: I’ve got this side project that I’ve been doing for a few years now, where I play a lot of music that’s made in Edinburgh or linked to Edinburgh labels, and then maybe a bit wider in Scotland. A lot of that’s been brought into my side of She-Bang.

Why do you think that women DJ collectives like yourselves matter in the Scottish scene?

Kirstie: It’s important because why shouldn’t anybody DJ? There’s still a lot of stigma that gets faced by people. It gets said a lot that women only get gigs because they’re women and because they’re trying to do the 50% gender balance thing. It’s not true. It’s good that there’s a 50% target. That means that more women who are DJs can get the gigs that they wouldn’t have got before, because more men were getting the gigs. But it’s not about getting gigs just because you’re a woman. I would hate to think that I was asked to play somewhere just because I was a woman and the music I played wasn’t actually appreciated.

How do you think things have progressed for women DJs?

Do you have any favourite highlights from places you’ve played since you started She-Bang?

Kirstie: We played the opening night of Hidden Door at Leith Theatre on the main stage. It was terrifying. On that day, they sold out, which was a good few 1,000 tickets. Leith Theatre is just such an amazing building. I’d never been in it before that day.

Vicki: And Kelburn obviously. Just seeing people raving in trees to our tunes. A ballooned up T-Rex going across the crowd. It was an amazing thing.

Kirstie: One of my highlights is pretty funny. I played at the school disco for the kids. I was just doing it as a favour and I really was not looking forward to it. They asked me to play Taylor Swift. That was when everyone was into doing the floss. It was 100 kids all doing the floss in perfect synchronisation in front of me. Not so much a She-bang one, but it is a DJ highlight. 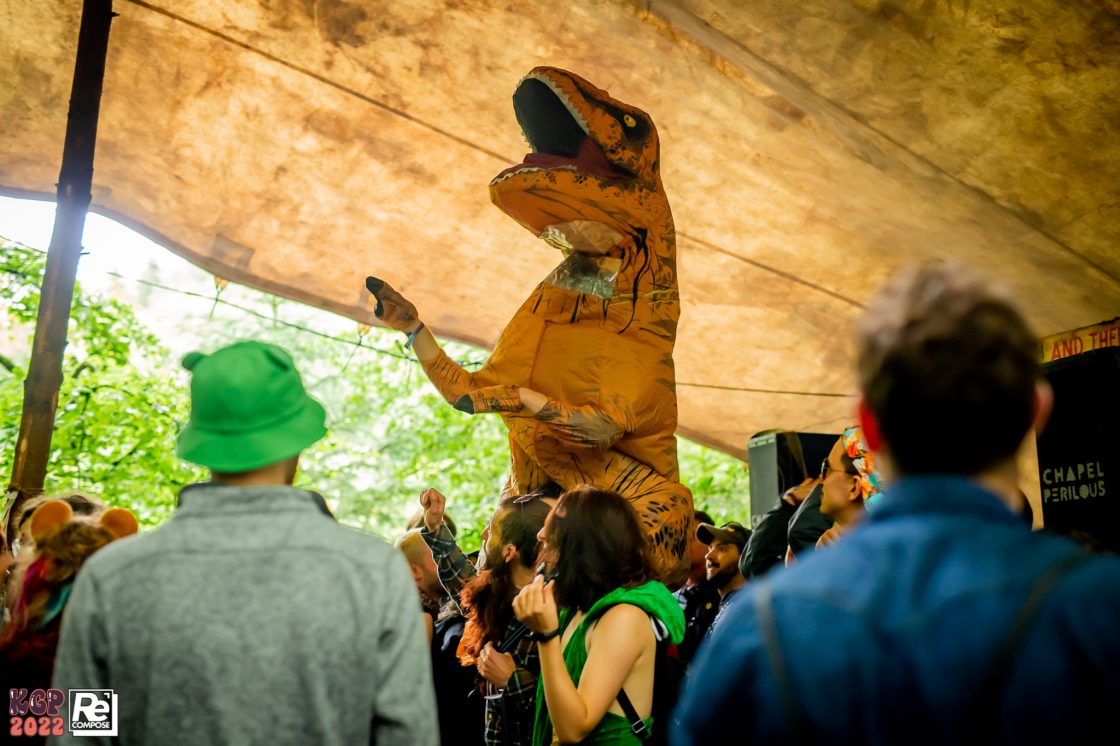 When you first started raving, did you think you would still be doing it now alongside parenthood and everything else?

Kirstie: I remember Vicki one time saying to me, maybe four or five years ago, “Are we too old to do this now?” We both felt like that, but I think that’s much more of a feeling that we have as women. That we might be looked down on for doing this. But what about poor dear departed Andrew Weatherall? They’re not saying that. Maybe they thought it themselves, but nobody’s judging him for his age, so we shouldn’t worry about it too much.

Vicki: The tales behind the DJ decks. It’s like, “How’s your menopause coming along? That’s a banger, but yeah my period’s…” I thought you were supposed to naturally grow out of stuff and start bird watching or gardening or whatever, which you kind of do.

Kirstie: I started doing all that. I just still like raving as well. I don’t know many people who have given it up.

Right now, what is your top tune to get the party bouncing?

Kirstie: There’s a track that I’ve played a few times that is called “Paris Madness” by Samaran. This particular track is absolute fire. I don’t play it straight away. I save it for a little while.

Vick: For me this year, the highlight has been playing out “Wild Flowers” by Warmduscher, because it’s got all the swear words in it and it’s right up my angry street. I’ve enjoyed mixing that in and surprising people a bit.

Finally, what’s been your favourite set that you’ve seen at Kelburn?

Kirstie: Hands down, The Ragga Twins this year. But when I say hands down, I don’t know if I can separate that from Sorcha and Nem, so I’ll say both.

Vicki: Free Love were absolutely brilliant. I almost greeted at the end of that, it was so good. And obviously all our friends that played. There’s nothing better than seeing your pals up there giein it laldy.